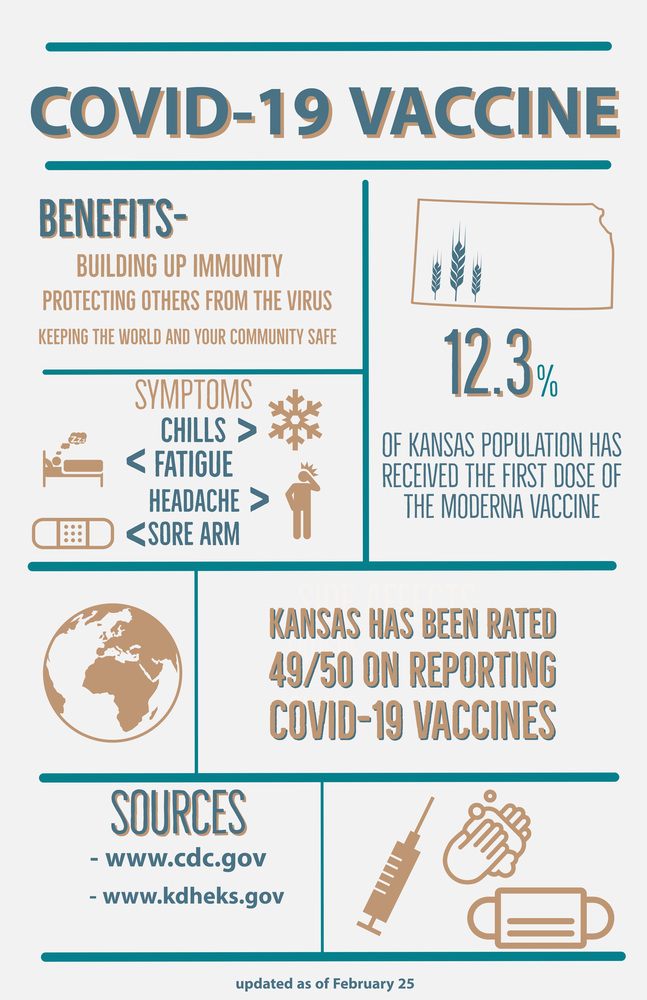 In response to the pandemic, three new COVID-19 vaccines have recently been released to the public. The original two vaccines released were Modena and Pfizer, but another vaccine, Johnson & Johnson, has just recently been released but is only 66 percent effective. Moderna and Pfizer are listed to be 95 percent effective, but both require two shots, while Johnson & Johnson’ vaccine only requires one shot.

The three vaccines offer protection and immunity build up from COVID-19, but only adults 18 and up can receive the vaccine.

“Vaccines introduce weakened, or in this case, inactive parts of an organism to the body to trigger an immune response,” USD 284 nurse Amber Schlup said.

These vaccines inject similar, but harmless, proteins from the virus into your body, which give your body the blueprint on how to fight off the virus.

There can be some side effects the day of or day after receiving the vaccine but they vary from person to person.

“Several hours after the shot, my arm was very sore but that was the only side effect I had,” business teacher Bernice Albers said.

The most common side effects to be reported were having the chills, a fever, fatigue or sore arm. These are all signs that your body is building up its immunity to the virus.

The first ones in line to receive this vaccine were healthcare personnel and nursing home patients. The Moderna vaccine is not available for 18 and under because younger kids are not at a high risk for severe illness from the COVID-19. Clinical trials have been started to test high risk patients who are younger.

In Kansas, receiving the vaccine has currently been very slow and the state has been ranked 49 out of 50. This is partially due to the poor record keeping and reporting. Overall, a total of 411,379 Moderna vaccines have been given to Kansans, while 202,787 doses of Pfizer have been recorded.

These first two vaccines have shown to be effective as the number of COVID-19 cases slow down. From the end of January to the end of February, cases in Kansas have dropped from 1,500 to 400 in just a month because of the vaccines being provided to the state, as well as the continued mask mandate and social distancing requirements.