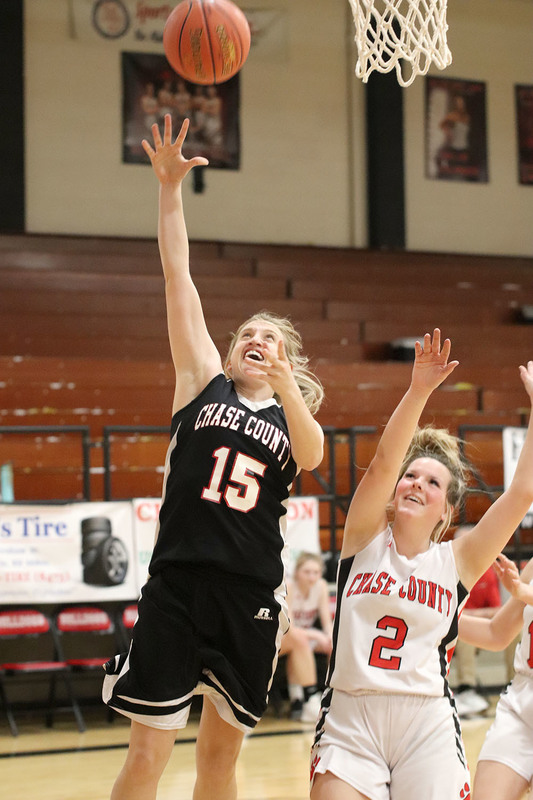 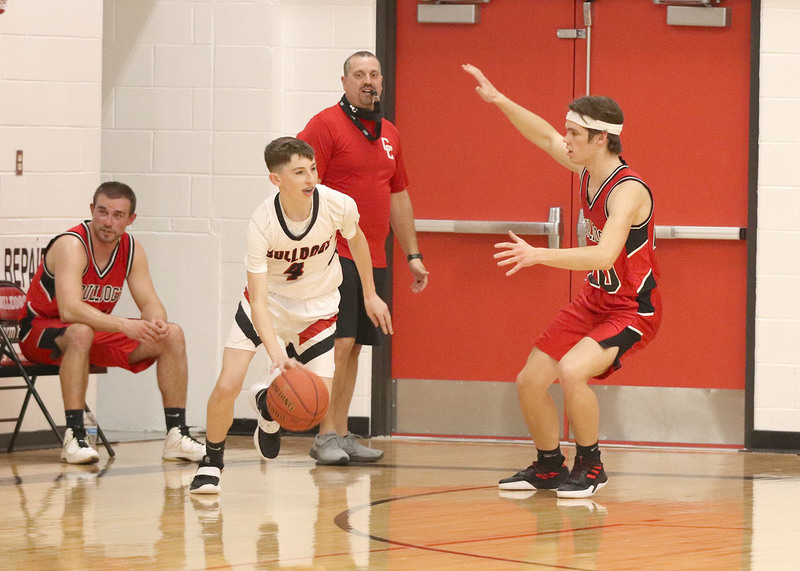 During the boys alumni game, freshman Tag Groh tries to go in for a basket while alumni player Caleb Stout blocks. The alumni  team won the game on a last minute shot by elementary principal Brock Peña.

Student Council (StuCo) first started the Winter Extravaganza event two years ago as a way to do Winter Courts and Parents’ Night after those events had been canceled due to bad weather. Due to the success of the evening, the organization decided to make this an annual event as a way to help raise money for a person or family in need, and a fund, called Chase County Families in Need was established.

Each year, organizations donate baskets for a silent auction, which are on display throughout the evening, with those winners announced at halftime of the boys vs alumni game.

“The silent auction has become a big part of the event as well. Our organizations, and even community members, donate so many great baskets for the community to bid on,” Student Council sponsor Linda Drake said. “The competition to get a specific basket has been known to be very fierce at times, and as always, our community steps up to help out others by making very generous bids. In the three years we have sponsored this event, we have raised over $4,000 to help support our families.”

Over 30 alumni and several associated with the school district volunteered this year to play, coach or officiate. The numbers, and especially the men’s alumni roster continues to grow each year.

“I love playing at the Winter Extravaganza mainly because I like seeing my friends who have already graduated. I also like seeing which old men can still keep up. They are always competitive and still put up a good fight,” senior Brock Lauer said. “My least favorite part was when the alumni on the bench thought it would be a good idea to pull my shorts down to my ankles over and over again.”

Many of the alumni wanted to play just for the fun of it, and then there were others who still have that competitive spirit.

“It has been fun playing the past three years in the Extravaganza. It is a fun evening for the community to come out and enjoy. I would say the most difficult part is keeping up with those younger girls, and having fun but not letting my competitive side come out,” alumni player Becky Hinkson said. “But what I enjoyed the most was being able to play against my older daughter, Landry, and this year playing against my younger daughter, Lilly.”