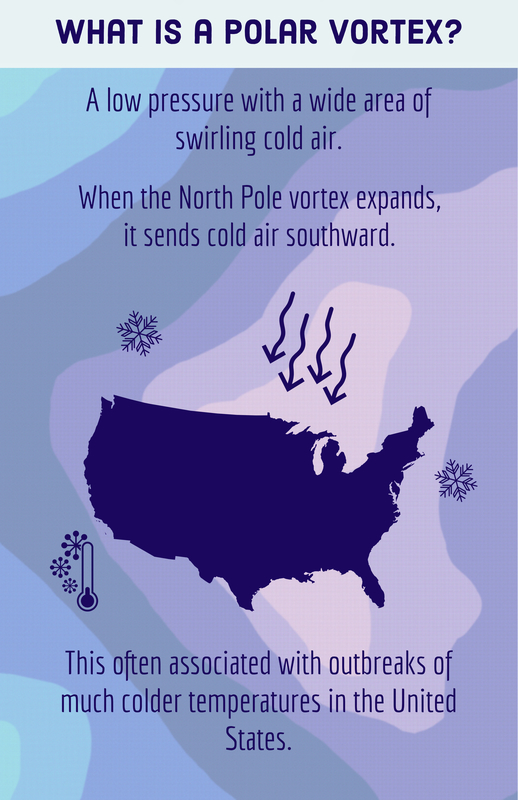 February was a rough month nationwide and Kansas had its fair share. With temperatures as low as -17 degrees and more snow than what had fallen in December. The reason behind this cold weather is because of the polar vortex going unstable. Now during the winter the vortex was strong, keeping the arctic air from spilling out, giving us a mild winter. Though during the start of 2021 the vortex had started to weaken and sink down, allowing the arctic winds to travel and bring a much colder weather than what was expected. This cold weather has brought major issues to people’s work.

“The weather did not affect me nearly as much as it affected my job. It made work harder because the water tanks froze up on us, so I had to thaw water pipes out. The cattle overall handled it better than I expected they stayed strong throughout the weather. It only affected the plumbing up at work,” senior Blaise Holloway said.

The weather had also caused power outages across the county and many others. Just Feb. 14 there was a controlled blackout from Evergy that affected many of its customers. This made warming homes and keeping the pipes from freezing more difficult to do.

“When they had the rolling black outs on the Monday we didn’t have school. We didn’t have power for three hours and that didn’t help because during the winter we have a tank heater and when the power goes out it won’t work. We have a wood stove in our house so we stayed warm,” junior Trenna Dold said. “When we got affected by the blackout we had our first calf of the season down in our basement. My sister and I took care of that calf by candle light and a flashlight for three hours. We were sitting next to the wood stove, but we saved the baby and he is happy and healthy now. We didn’t have any plumbing issues luckily because our house did stay in the low 70 degree temperatures due to the wood stove. We also live on a well so when the power went out I had to flip a switch for the hot water tank to work again.”

Some school days were canceled due to the cold temperatures and icy roads, which could be a blessing to some, but for others, this could affect their mood and productivity.

“The weather especially affected my school days negatively. It was nice to have one day off, but I didn’t like not being at school for a couple different days,” junior Laura Koch said.