Junior Nora Budke records her prose piece, which was called " One Sunny Day in April" by Deborah Gattey, for the league meet. Budke finished third with this piece the competition. 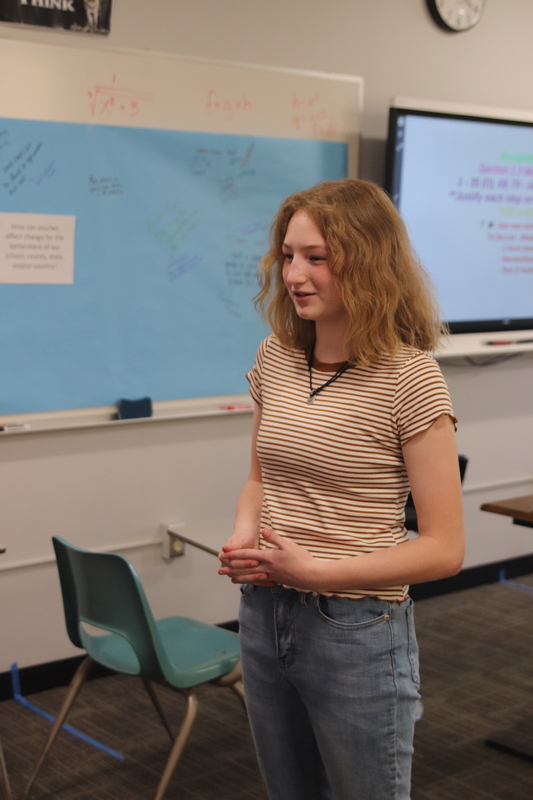 During the Zoom portion of league finals, sophomore Leaya Francis presents her oration on how high schools should have home economic classes in the curriculum. This is Francis' first year to participate in forensics.

Instead of going to a school to perform live for the league forensics meet, students entered recordings prior to the meet and those who made finals performed live through Google Meets. The meet was hosted by Northern Heights on March 29.

“This year league forensics was very different from years past. It was hosted on Google Meets. This meant each student performed their events at their individual school. This made it difficult because we all had to find our own classrooms to perform in right after school. We weren’t presenting in front of an audience like we normally would have. It did feel as though there was less pressure when I was presenting. I didn’t feel like I was being watched as harshly as I had in years past,” junior Nora Budke said. “Overall, I was disappointed that we had to do forensics differently this year, but I’m also appreciative of the schools that stepped up to host meets virtually this year so the students could still do what they loved.”

“This was my first year doing forensics so it felt better to do it online just because it helped with my nerves. I was pretty surprised when I found out I placed second at league. That was my second forensics competition I’ve ever done so I was surprised by my placing,” Jones said. “I love doing extemp and I love being able to express my views through a speech and competing among my friends.”

Forensics offers many students the opportunity to try a new experience, especially if they have a love for performing.

“Forensics has been a very positive experience that has helped me figure out who I am and what I enjoy most about life. Early in my forensics career I was able to make new friends and develop my own sense of humor and style of performance, an invaluable tool to anyone who has trouble with public speaking and performing. Before my sophomore year of high school, the first year in which I started doing forensics, I had never thought of myself as a performer. Doing IDAs with my good friend, Shea [Tyrrell], and performing solo pieces throughout that first year helped me realize my love of performing,” Shaw said. “I had absolutely no idea that I was even in the running for being a league champ this year, so hearing the news made me incredibly excited and confused. It was very bewildering news, especially considering the fact that the event in which I won, Impromptu, was an event that I had never done before; I had merely agreed to it because I wanted to make sure that there were enough people in the event so that my friend, Paden, could compete in his event. Overall, I was very overjoyed and proud of my accomplishment at league, and I am looking forward to competing at state.”